First, the historic news: Meals Ready to Eat (MRE) pizza. Some said it could never be done, but Army food researchers have succeeded in developing a shelf-stable (and still tasty) prototype MRE slice. 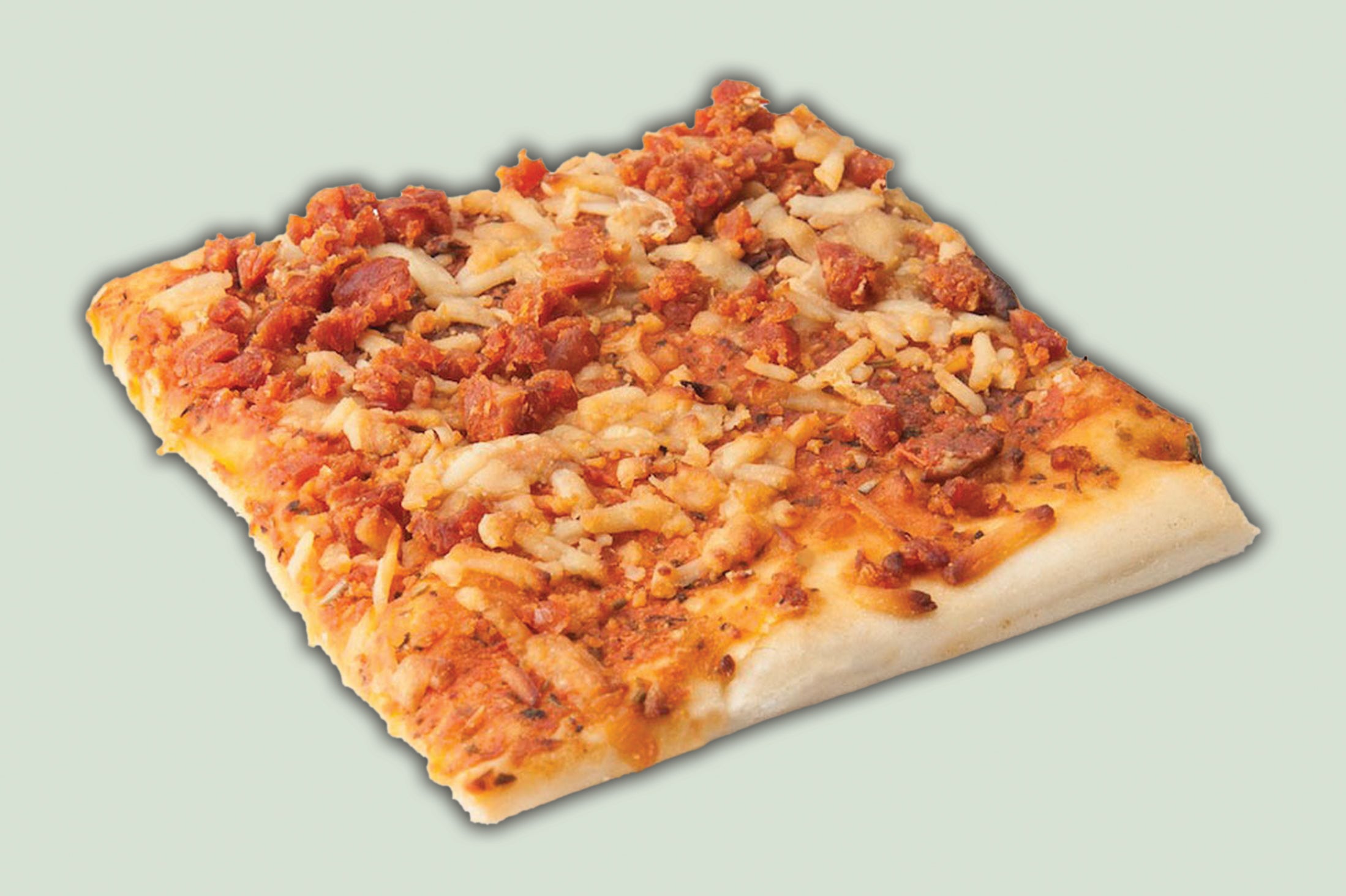 A slice of the newly developed Meals Ready to Eat (MRE) pizza. It can withstand three years of storage and 50-foot drops. (U.S. Army/David Kamm)

The Army’s road to MRE pizza has been a long, arduous and sometimes yucky journey, however. It began, of course, during the Revolutionary War, when fresh animal protein was self-deploying—that is, it walked to wherever it was going to be distributed and consumed. When the war began, field chow was essentially a brown-bag affair because soldiers in local militias brought along whatever they could from home, augmented by whatever they might pick, pluck or shoot along the way. Cooking it fell on the soldiers themselves. Sustainment was necessary only for a matter of days or weeks because that is how long early marches and battles took. As the war went on—and the British decided that the Colonials were not going to get away with it, deploying more forces—days and weeks became months as the fight grew into regional campaigns and lengthy sieges. This created a sustainment problem for the Americans.

As Colonial field forces primarily were drawn from militias, it was up to an individual colony’s leadership and taxpayers to feed them, meaning that a militia unit from Connecticut might (or might not) eat better than a unit from Rhode Island, for example, depending on the largess provided. Army chow was all over the map, literally.

With the organization of the Continental Army and larger formations of militias and regulars fighting alongside each other for longer periods, the feeding problem became increasingly complex and often more frustrating for leaders who needed to centralize the system, so Gen. George Washington appointed a commissary general, Joseph Trumbull, to get chow down to the troops.

Trumbull set up a system of procurement, requisitioning provisions from each colony and setting a timetable for transportation and delivery. The timetable piece fell short of optimum, but Trumbull’s lasting contribution is the organizational concept. The lineage system exists today.

American soldiers got a liquor ration in 1785, 4 ounces of rum, but as time went on the ration was halved, then raised for soldiers serving on the frontier, and subsequently cut again. The Army liquor ration was eliminated in 1832; coffee and sugar replaced it.

Amounts and components of a soldier’s daily ration shifted by the War of 1812. Four ounces of beef were added, but it was vegetable poor, lowering the resulting nutritional value and leaving the soldiers of that war less well-fed than during the Revolution, according to experts. 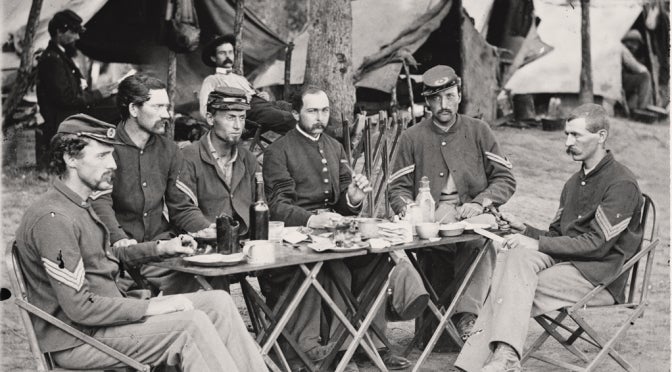 Confederate soldiers generally fared less well nutritionally, especially as the war went on, save for when they captured rations from Union depots or supply wagons. Everyone foraged for what was available to supplement rations, and a subtler system offered soldiers food (and other) diversions for cash.

Components changed, but the nutritional value of the daily ration for a soldier in the Spanish-American War was about the same as in the Civil War.

The biggest change in field rations came during World War I. More items were offered (17 components) and substitutions were allowed. Judged against contemporary nutritional requirements, a World War I soldier only lacked sufficient Vitamin A, according to experts. Generally, even combat rations were prepared near battlefields as they had been since the Revolutionary War; however, tinned rations also were issued. The tins were packaged with other food items for times when hot meals could not get through.

The full-fledged canned field ration came along in 1939, when the Army adopted the C-ration. 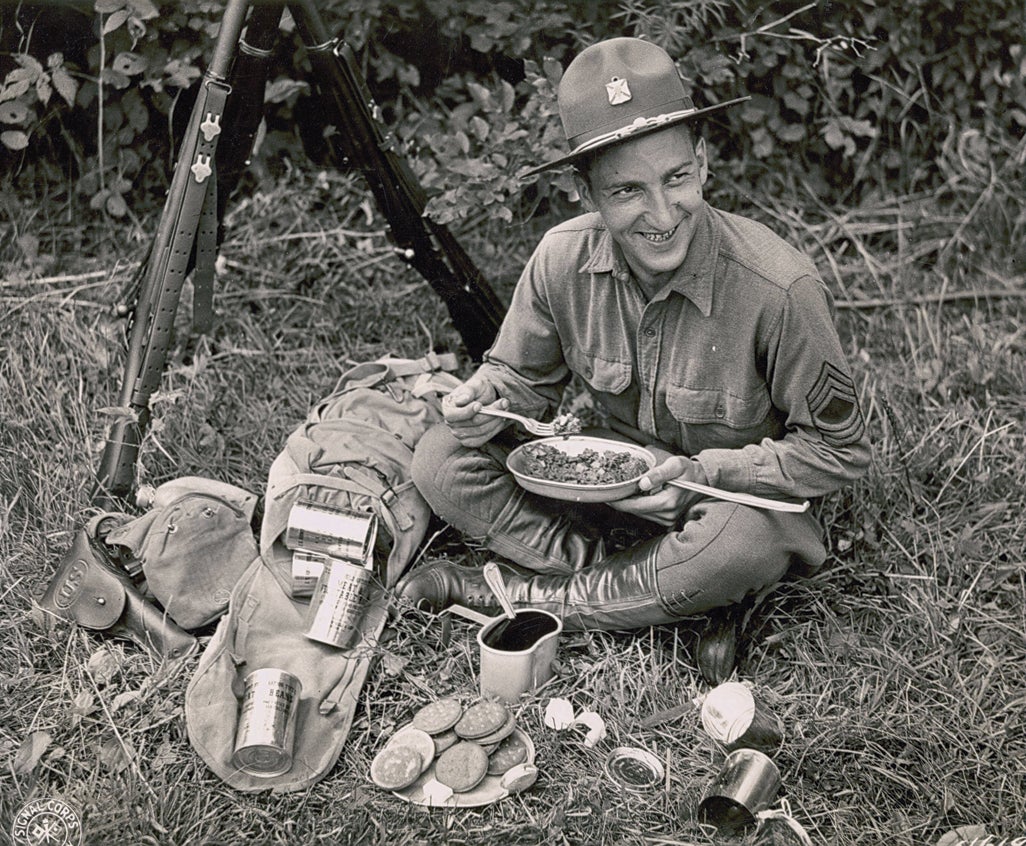 C seems to be a logical designation (for canned), but to the supply system, apparently, C was just another letter. Later, it was replaced with the Meal, Combat, Individual: the MCI. Soldiers just naturally thought it meant “canned” and have since then.

The D-ration—just another letter, too—was adopted at the same time as the C-ration. It was a package of three 4-ounce chocolate bars with oat flour mixed in to reduce melting in hot climates. It was designed as an “emergency” meal that could be carried in a pocket. The K-ration (again for no reason other than to be different from C or D) was a multicomponent squad-feeding package adopted during World War II.

The C-ration continued service after the war, and it stood the test of time. Some of the meats were suspect, but the canned fruit was good, and several cigarettes—usually an unpopular brand—were included. (It was a different time.)

Adjusted and supplemented somewhat from World War II, the C-ration remained the primary field ration until 1981, when the MRE was adopted.

During the Vietnam War, a package known as the LRRP ration (standing for long-range reconnaissance patrol) was introduced. Much lighter than a C-ration, it was issued to some units for long patrols or combat operations. The LRRP ration disappeared when stocks were depleted after the war, but another series of rations—weighing less than MRE packages—took its place during the Iraq and Afghanistan wars. The accepted practice, however, is to “strip out” an MRE package to reduce weight, which means keeping only the things you like and throwing away the rest. 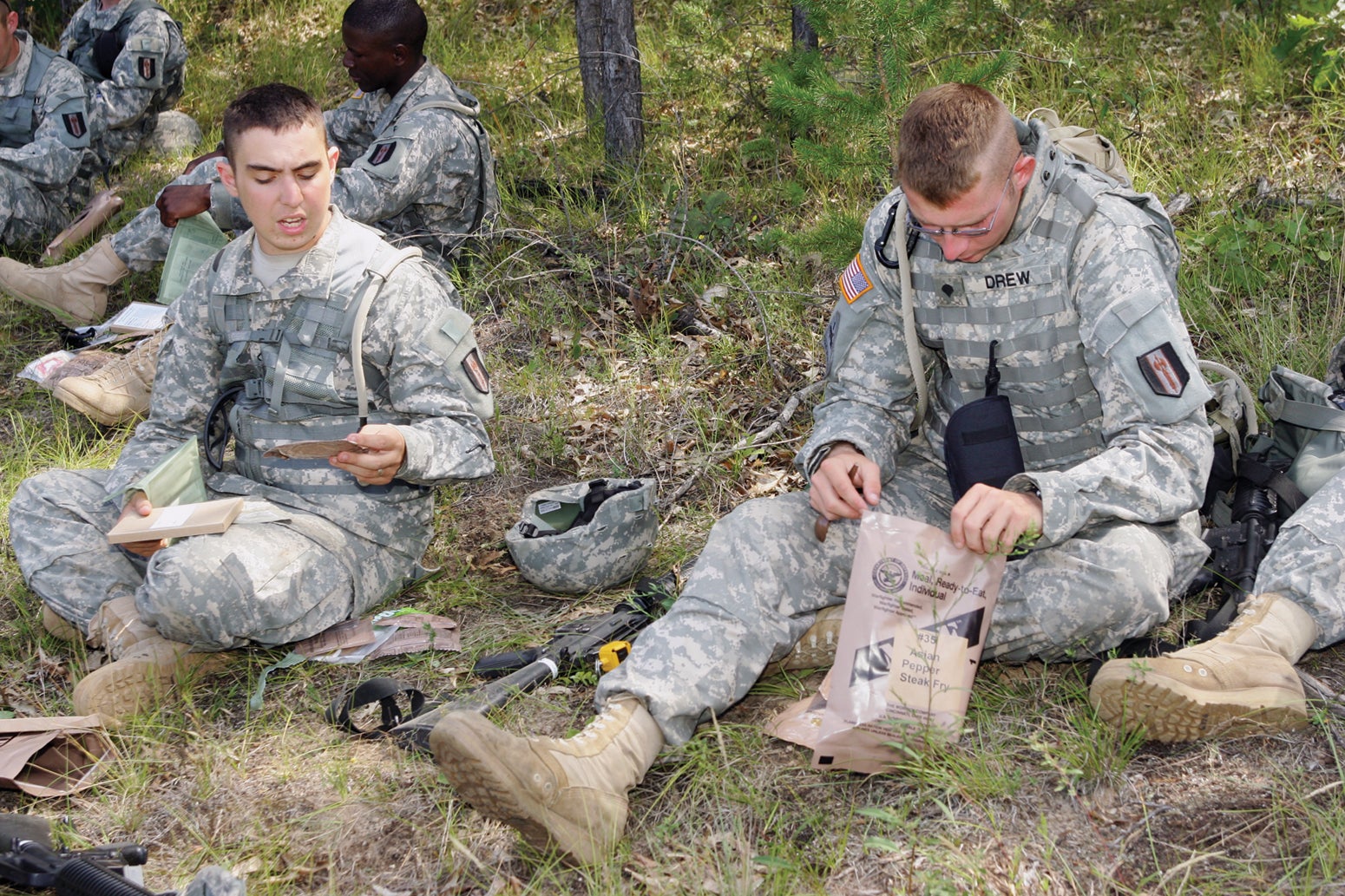 The MRE menu (24 different meals since 1993, starting with 12 meals in the early 1980s) changes year to year, with some things being swapped out to incorporate improvements. Mainly, however, changes are made to adapt to soldier likes and dislikes. Spaghetti with meat sauce holds the top MRE meal honor, remaining on the menu since its 1988 introduction. In the future, however, pizza could be a contender for the title. - See more at: