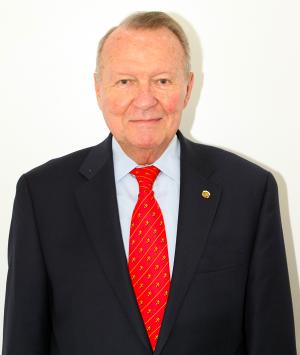 Gen. Carter F. Ham, USA, Ret., AUSA president and CEO, said, “Col. Beckner made a huge difference to the soldiers, civilian employees and families stationed in Europe, especially in his beloved Stuttgart area. He will be long remembered for his unwavering love of country and his unbounded love of American soldiers.”

Beckner enlisted in the U.S. Army in 1946 and served in Japan before serving in the Army reserve and the Army National Guard, where he achieved the rank of master sergeant.

In 1950, Beckner was commissioned a 2nd lieutenant of infantry and served as an officer in the Regular Army until his retirement in 1980.

His awards and decorations include the Silver Star, the Legion of Merit with three Oak Leaf Clusters, the Bronze Star with V Device with three oak leaf clusters and two Commander’s Award for Public Service.

He was also the recipient of the prestigious Staufermedaille from the Minister President of the State of Baden-Wurttemberg in recognition of his contributions to German–American relations.

Following his retirement, Beckner became a manager at the U.S. Cooperation in the Defense and Aerospace Business Division of Alcatel SEL in Stuttgart, Germany, where he served until 1990.

While residing in Germany, Beckner made exceptional contributions to the Association of the U.S. Army and to the Stuttgart military community.

For his dedication to AUSA’s mission, he was awarded the AUSA Distinguished Service Award in 2011, and the Major General Anthony J. Drexel Biddle Medal in 2013.

The citation for the Biddle Medal read, in part, “While residing in Germany, Colonel Beckner has made exceptional contributions to AUSA and to the Stuttgart military community.

“As the immediate past president of the Stuttgart AUSA Chapter, Colonel Beckner has served the chapter for more than 15 years in the role and is the primary figure responsible for the chapter’s persistence in the face of repeated drawdowns of U.S. Army personnel in Germany.

A Facebook post on June 15, 2016, from AUSA’s European Region said, “Dave was an inspiration to all, a great Soldier and leader... just an outstanding individual. It is sad, but fitting, that he passed on the Army’s birthday.”