Rocky Research didn’t set out to create a new type of armor—far from it. When the new material first slid out of the company’s production oven, it caused considerable consternation. A worker responsible for cutting the material into usable shapes for a high-tech heat dissipation system found that it couldn’t be cut with ordinary tools.

Wondering just how strong this new material was, he took it to a shooting range and discovered that bullets couldn’t pierce it, either. The material proved so durable that “we had to laser-cut it,” said Uwe Rockenfeller, president and CEO of Nevada-based Rocky Research. “That’s when the concept of using it as armor came about.”

The company called the material COMBAM, for Coordinative Molecular Bond Armor Material. Using a high-temperature process to grow metal inorganic crystals on the fibers in a woven fabric, Rocky Research scientists invented an exceedingly tough textile. They had set out to make material tough enough to prevent heat from deforming the heat exchangers in special refrigeration systems. Difficulty in processing the material led to the serendipitous creation of COMBAM as a ballistic material.

When multiple layers are pressed together and sealed with epoxy, the material resembles a combination of fabric and ceramic armor, but it’s lighter and cheaper than the body and vehicle armor the Army currently uses, Rockenfeller said.

COMBAM provides “25 to 30 percent higher velocity protection than other materials,” he said. That means it will stop bullets or shrapnel traveling 25 to 30 percent faster than stopped by current armor. Or, expressed another way, to provide the same degree of protection as today’s body armor, COMBAM would be 25 to 30 percent lighter.

Constant Search for Improvements
The Army is constantly searching for better armor. Its laboratories and scientists diligently examine new materials and manufacturing methods, and analyze armor performance. There’s no shortage of claims by companies and academic researchers that they have developed innovative materials that will make armor lighter, more flexible, stronger and cheaper.

Retired Army Col. Bruce Jette is familiar with the assertions. Now president and CEO of Synovision Solutions, he headed the Army’s Rapid Equipping Force during the early years of the global war on terrorism, when the Army was desperate for better body armor and vehicle armor. More recently, he participated in a study of armor with the National Academies of Sciences, Engineering and Medicine’s Board on Army Science and Technology.

Often, it turns out, “the materials that are offered up don’t provide overall improvement” to the armor the Army is already using, Jette said. 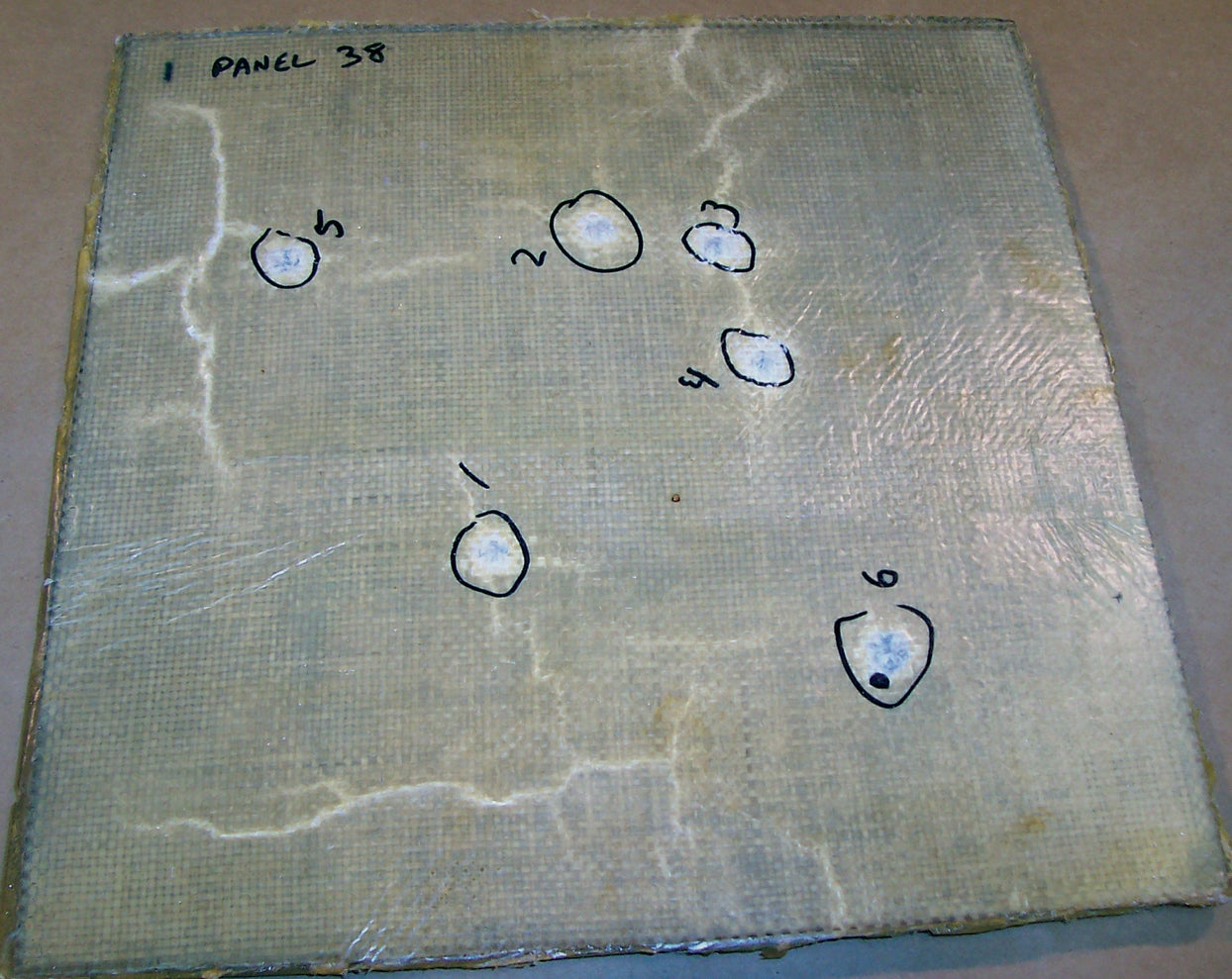 But COMBAM may be different. The Army’s Aviation and Missile Research, Development and Engineering Center is testing the material for use as armor in the protective containers that store rockets and missiles. The armor would shield Hellfire; Tube-launched, Optically tracked, Wire-guided; Joint Air-to-Ground; and other missiles during storage and transportation so bullets or shrapnel don’t penetrate the cases and ignite the missile propellants.

COMBAM is the first material that actually meets the Army missile container armor standards, Rockenfeller said, adding that the process used in today’s armor does not, so it requires a waiver.

The rectangular missile containers are about 6 feet long and made of thin aluminum, Rockenfeller said. They need armor to protect a 2-foot-long section that surrounds rocket motors. Lengths of 1.5-inch-thick COMBAM, which “look like boards,” would be attached to the inside of the container where the motor lies. The U.S. Army may need as many as 20,000 protective shield inserts per year; global demand might be 50,000 units, he said.

That would be good for Rocky Research, and also good for the Army. “Cost is one of the real bright spots of COMBAM,” Rockenfeller said. Between 30 percent and 50 percent of the “high-cost fiber material” used in today’s armor would be replaced by “low-cost crystalline substance,” Rockenfeller said. “Aramid [fiber such as Kevlar] or polyethylene is replaced by roughly 10 times lower-cost metal inorganic salts.”

The key ingredient is a liquid that turns solid when it is struck hard by a bullet, shrapnel or blade. The liquid is shear thickening fluid (STF). It’s a thick solution that consists of microscopic particles suspended in liquid; often, silica particles are suspended in polyethylene glycol.

Because of their chemistry, the particles repel each other. So when they’re suspended in liquid, they disperse evenly. Even when closely packed, each particle naturally keeps space between itself and those around it. In that state, STF behaves like a liquid.

But when it is struck, the particles are forced together, clumping into a solid that’s strong enough to stop a bullet. The transformation from liquid to solid is instantaneous.

This phenomenon is not new. It has long been observed in the manufacturing of products including paper, toothpaste and paint. Mostly, it was a nuisance. Thick liquids would suddenly solidify, clogging factory pipes and shutting down production.

But in 2002, researchers at the University of Delaware saw other possibilities for STF, said Norman Wagner, a chemical and biomolecular engineering professor at the university. Working with the U.S. Army Research Laboratory, Wagner’s team demonstrated that high-strength fabrics such as Kevlar can be made more bulletproof and stab-resistant when impregnated with STF.

When Kevlar is soaked in STF that has been thinned by a solvent, the fluid seeps into the tiny gaps and crevices between the Kevlar fibers. The Kevlar is then placed in an oven to evaporate the solvent, leaving the STF. The fluid remains a waxy liquid until it is struck. Then it becomes solid, and the fabric becomes virtually impenetrable. The STF remains solid momentarily, then it returns to its liquid state and the fabric becomes flexible again.

Once the basic research on STF was completed, the university and the Army turned the technology over to defense giant BAE Systems to develop a usable liquid armor. In 2010, the company announced it would make “liquid” body armor that would be 45 percent thinner and much more flexible than existing armor.

That never happened, however. After progress at BAE stalled, the university terminated the company’s license and issued a new one to fabric manufacturer Barrday Corp.

Meanwhile, interest in liquid armor has spread. Wagner said “a lot of people” are now working on it, including researchers in South Korea, China, Russia and Poland.

New Materials and Protection
As for the Army, its STF researchers have turned their attention to another kind of armor: football helmets. The Army Research Lab received $500,000 in 2014 in a competition by the National Football League—and could receive $1 million more—to develop helmets that will better protect players from brain injuries.

Army scientists have designed a lightweight harness of stretchy tethers that connect players’ helmets to their torsos or waists. The tethers act as shock absorbers to protect players’ heads. The tethers are elastic straps embedded with shear thickening fluid. Most of the time, the tethers permit normal head movement. But when players are hit suddenly and powerfully, the shear thickening fluid in the tethers seizes up, and the tethers prevent violent movements of the head that cause brain injuries such as concussions.

That same helmet technology could reduce head injuries in paratroopers, said Eric Wetzel, an Army research scientist who leads the helmet project and led previous Army work with shear thickening fluid. It is “well-documented that the concussion rate for paratroopers is about twice that of a normal soldier,” Wetzel said.

At the University of Delaware, Wagner is also using STF-infused straps to engineer new types of prostheses. The straps appear to be promising replacements for missing tendons. “Think of the Achilles tendon,” Wagner said. “If you move it slowly it stretches out, but when you move fast it is tight,” reacting like an STF-enhanced strap.

Plastics Absorb Bullets
Shear thickening fluid is a rather prosaic blend of plastics producing another promising type of new armor, according to scientists at Rice University in Houston. It’s a type of clear polyurethane that not only stops bullets, but also seems to absorb them.

Edwin “Ned” Thomas, a materials and nanoengineering scientist and dean of Rice University’s George R. Brown School of Engineering, illustrated using a clear plastic disk about 5 inches across and 1½ inches thick. Buried halfway through it were three 9 mm bullets.

There were no cracks or other damage to the disk. And while the bullets looked as if they had been carefully encased in the plastic, they actually were shot there with a gun.

“This would be a great ballistic windshield material,” Thomas said.

The polyurethane is made from a combination of two inexpensive, everyday plastics: clear and brittle polystyrene—“think inexpensive drinking cups,” Thomas said—and polydimethylsiloxane, “the rubbery stuff that we all use to caulk around the edge of our bathtubs.”

Combined, the two materials “spontaneously arrange into glassy and rubbery layers,” Thomas explained. When struck by a bullet or shrapnel, the layers don’t break or crack. Instead, they bend and engulf the penetrating object.

In addition to ballistic glass, researchers say the polyurethane could be combined with other materials, such as Kevlar, to make better body armor; serve as cladding to protect spacecraft and satellites from micrometeorites; or as a coating to protect jet engine turbine blades.

Carbon Proves Promising
Carbon is another promising material for armor, at least in the form of graphene. Graphene is essentially an atom-thick layer of carbon atoms bonded together in a honeycomb pattern. When clumped together in tens of thousands of layers or more, the graphene becomes the rather mundane material graphite. But at the molecular level, graphene is exceptional. It is able to “absorb kinetic energy from a high-speed projectile twice as well as Kevlar, and 10 times better than steel,” Thomas said.

Working with graphene on a microscopic scale, researchers have discovered that it is surprisingly stretchy, enough to dissipate much of the energy of a microscopic bullet. By stretching, layers of graphene could spread out a bullet’s impact. “The game in protection is getting the stress [of the impact] to distribute over a large area,” Thomas said.

Because it is strong and lightweight, graphene should be able to make better armor for people as well as for vehicles and aircraft, he said. However, it’s not yet possible to produce graphene in the large quantities that are required for making armor.

Not all of the roadblocks for new armor are scientific ones. For example, the Army is interested in a fiber called Dyneema. Its maker, Royal DSM, claims Dyneema is “the strongest and most durable fiber in the world.” It’s 45 times lighter than aramid fibers such as Kevlar, the company said, and 15 times stronger than steel. Dyneema is already being used in body armor and vehicle armor, but not by the U.S. military.

“It’s a very good product,” Jette said. However, Dyneema maker Royal DSM is a Dutch company, whereas Kevlar is an American-made product. Kevlar is protected by “buy-American” legislation passed by Congress. According to U.S. law, “when you buy a product for soldiers that includes fibers in it, they have to be American-made fibers,” Jette said.

DSM has set up a production plant in North Carolina that might help it skirt the buy-American restrictions. Another plus: Several companies hoping to develop the Army’s future “soldier protection system” have proposed armor that uses Dyneema. So far, the Army has not selected manufacturers.

Other armor innovations include: