This summer, the Army initiated a focused effort to promote diversity, equity and inclusion across the ranks through Project Inclusion. In support of fostering more diversity in the officer corps, the U.S. Army Cadet Command has been encouraging more Hispanic and Black cadets to sign up for ROTC programs to become Army officers.

Encouraging diversity in leadership not only benefits young soldiers and officers but also will ensure the Army adapts and draws on the experience and knowledge of an ever-changing force, said Maj. Gen. John Evans, commanding general of Cadet Command.

“Diversity is important because we have lots of research that has determined diverse organizations are more effective organizations. I think when you bring in different viewpoints from different backgrounds, you are going to get a much richer discussion on how you solve problems,” Evans said. “Inclusiveness is another part that has to follow diversity. We want diverse organizations but they have to be inclusive. They have to make sure we are taking those people who come from a minority demographic and including them into the very fabric of what we do.”

One way of guaranteeing diversity and inclusiveness is by ensuring the soldier population is similar to the demographics of the American public.

“We are looking at how the demographics are building over time. If you take a look at demography in the United States right now, Caucasians are on a decline, African Americans are at a slight decline as are Asian Americans, but Hispanics are on a very significant incline, so they will be a very significant part of the population in 15 to 20 years,” Evans said. “What we want to do now is ensure we are bringing [members of minority populations] in at a sufficient density that we have an officer force at the senior level that reflects what we believe our enlisted and lower officer force will be 15 or 20 years from now. From a gender standpoint, we also want to see an increase in women in combat arms.

“Diversity continues to be a key component in what we do, and we have to look forward where the demographics are taking us so that we aren’t just meeting the current market, but we are trying to exceed that market so we lean toward the direction the market is going,” he said. 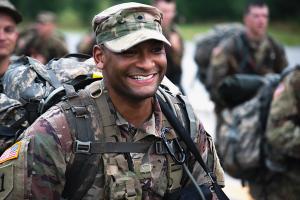 Cadet Command has been encouraging more diversity in the officer corps through the General Patton Internship Program. The program, established in 2017, is designed to place the best-qualified armor and infantry first lieutenants as cadre with historically Black colleges and universities’ ROTC programs, or at colleges and universities with a high number of cross-enrolled students from HBCUs.

The goal of the General Patton Internship Program is to increase minority accessions into infantry and armor branches upon commissioning. It is hoped that increasing the number of minority officers in those branches will help with proportional diversity in the Army that reflects the societal melting pot of ethnicities. Patton interns not only increase visibility of young officers on college campuses who are relatable to the college student population, but also, their presence and influence may enhance the ROTC program’s appeal to other minorities in student populations.

Patton interns are required to complete the Master Educator Course, a collaboration between Cadet Command and the University of Louisville, Kentucky. This is a four-week instructor course with content that focuses on the knowledge and skills required to perform as a Senior ROTC instructor on a university campus. Upon completion of the Master Educator Course, Patton interns will earn 18 semester hours toward a master’s degree in higher education administration. Patton interns have the opportunity to complete their master’s degree once they return to their university.

In addition, Patton interns gain invaluable leadership experience as mentors to cadets and transitioning lieutenants, enabling them to use their knowledge to make an impact on the diversity of the Army today.

They must also complete the Cadet Command instructor certification process on their assigned campus. Other general requirements include: serving a tour of 16 to 18 months (combat experience is highly desired); meeting Army Combat Fitness Test and height/weight standards; having a strong desire to mentor, develop and guide future officers on the opportunities for a career as an infantry or armor officer; and possessing an approved security clearance of secret or higher, or interim secret clearance at the time of application submission.

Officers selected for the General Patton Internship Program will provide assistance to their school’s professor of military science to increase and improve talent management in armor and infantry branches, reflecting the diversity of society. Serving as assistant professors of military science, they will assist in the daily operations, administration, sustainment, property management, budgeting, training and instruction of Army ROTC on a diverse college campus. Patton interns also support operations by assisting with planning training exercises, coordinating resources and reviewing training.

The interns also lead and develop cadets, while mentoring and coaching current and future cadets. Their experience will be shared with the cadets to help them make more informed decisions during branching. Patton interns also participate in Cadet Summer Training by assisting the ROTC cadre in teaching small-group tactics and maneuvers.

A second diversity initiative, the General Cavazos Internship Program, named after Gen. Richard Cavazos, who was the Army’s first Hispanic American to achieve the four-star rank, is being established by Cadet Command. This program is similar to the Patton Internship in how it works, but it is designed to place the best-qualified Hispanic-speaking lieutenants as cadre at university ROTC programs in the Southwestern U.S. and Florida, or at colleges and universities with a high number of cross-enrolled students from densely populated Hispanic locations.

The goal of the General Cavazos Internship Program is to increase accessions of Hispanic Americans. The Cavazos interns not only increase the visibility of young officers on college campuses who are relatable to the college student population, but also, their presence and influence can enhance the ROTC program’s appeal to the desired student population. 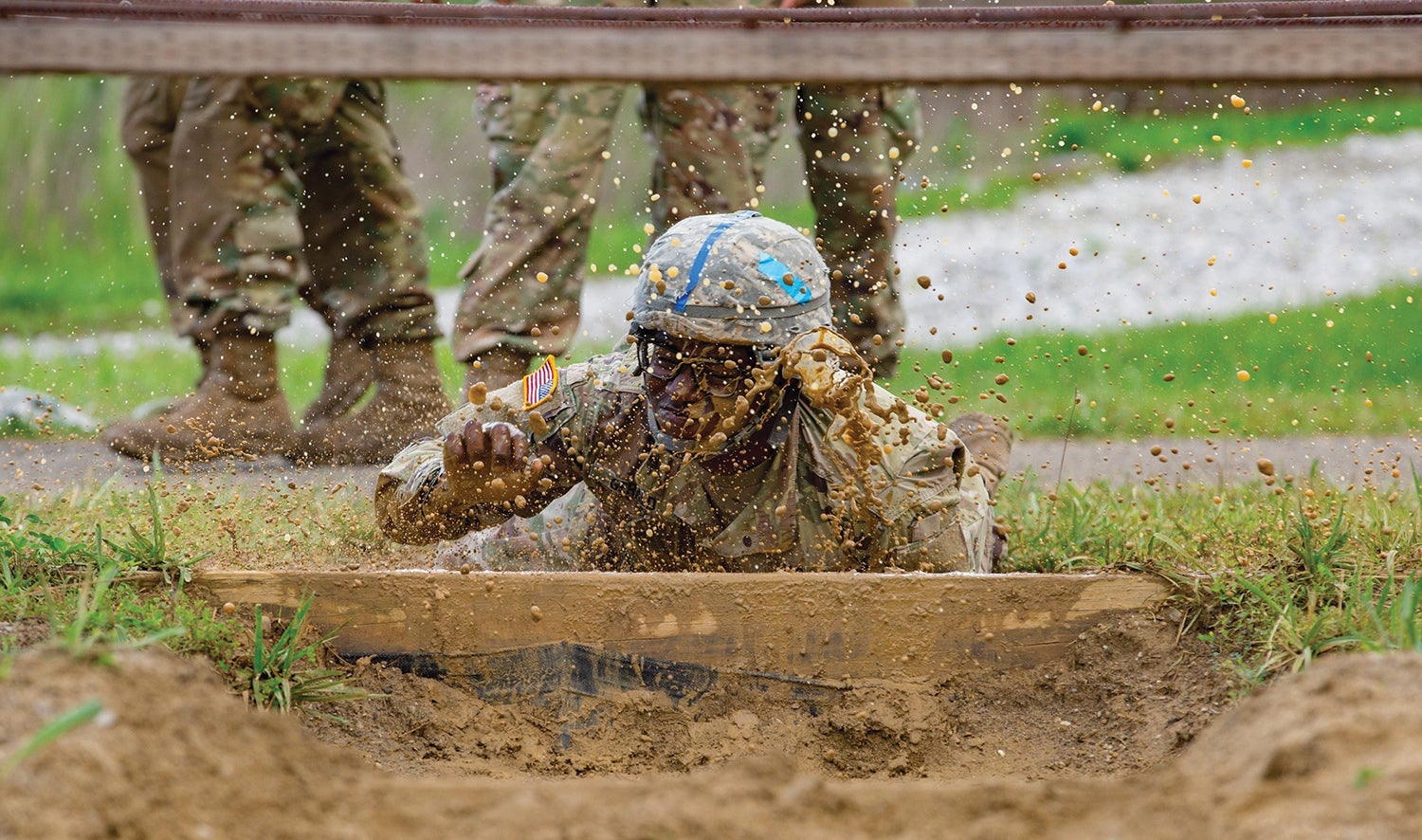 Cadet Ra’Shun Gerald splashes down into the mud at the start of the hand grenade assault course at Fort Knox, Kentucky.
(Credit: U.S. Army/Kyle Crawford)

The General Cavazos Internship Program is still in its infancy, therefore, little information has been spread across Army formations. In an effort to garner more support for the program and increase the number of qualified American Hispanic applicants, Cadet Command is working to inform leaders.

Evans said the programs provide benefits for participating lieutenants and the Army as a whole.

“They give us young company-grade officers who are only a few years removed from the cadet cohort, so they can relate better. That makes it easier for them to speak to cadets at the HBCUs and [Hispanic-Serving Institutions] about what the combat arms experience is like at the company grade, at the platoon level,” Evans said. “That is one of the big benefits we are trying to get out of the internships as we try to encourage more officers of diversity, African American and Hispanic in this case, but also female, to choose the combat arms as their preferred branches or to preference them high on their list branches.”

The programs can also broaden a young leader’s experience during a time when they are learning their craft as a junior officer, he said.

“Another one of the things the programs do for the lieutenants is that it gives them the opportunity, after being in the field force for a couple of years, to step away and take a more strategic look as a broadening opportunity at a very young age, and see the types of things that are going on in the training base,” Evans said. “The Master Educator Course can help them get started on a master’s degree or something like that. It also gives them about a year’s worth of predictability in regard to their family’s schedule as well—not something you normally get as a brand-new lieutenant.”

Evans said he is hopeful the programs will also help identify any barriers for minorities who want to enter combat arms.

“Moving forward, one of the things that our lieutenants can do is to help us recognize and report barriers to entry to combat arms that we see right now, whether conscious or unconscious, the things that keep men and women of color from branching combat arms. If those barriers are there, they can help us identify them and maybe culturally, we can work to change them,” he said.

There will also be an unforeseen benefit for Caucasian lieutenants as the programs grow, Evans said.

“And one of the tertiary benefits of the program is because we don’t have high enough density of African Americans or Hispanics to fill all of the spots in the internship programs, some of the Patton and Cavazos officers will be Caucasian. What it does for them is it puts them in an environment where they are probably for the first time in their careers a minority representation,” he said. “So as we take a look at what we are doing in the Army in regards to diversity and inclusiveness, it’s a very powerful tool for a new lieutenant to be put in an environment where they have probably never been a minority officer—particularly in combat arms—and they can learn from that experience and take that back with them to their company commands so they can have a more rich discussion on diversity and inclusion.

“That’s an element that we weren’t expecting as a benefit for our officers and our force, but it’s one that I think will be very valuable down the road,” he said.

The Patton and Cavazos Internship Programs are managed by Cadet Command’s U.S. Army Human Resources Command account manager in conjunction with the talent managers of the different career branches. Lieutenants interested in being considered for one of these programs should contact their career manager to let them know they are interested in participating in one of the programs if the opportunity is available. In the future, the two programs may also open for lieutenants to select their preferences, and career managers will select nominees from among those who have shown an interest in being an intern.

Army ROTC produces approximately 70% of the officers entering the Army each year and is available through nearly 1,000 college campuses nationwide ranging from Harvard University to the University of California, Berkeley, from Tufts University in Massachusetts to Ohio State University. Army ROTC teaches leadership and discipline, management techniques, cultural awareness and problem-solving. Those who participate in Army ROTC and subsequently serve as Army officers develop leadership and managerial skills that last a lifetime.

Michael Maddox is a public affairs specialist and media relations manager with the U.S. Army Cadet Command, Fort Knox, Kentucky. Previously, he worked for the Army National Guard, the Navy, the Veterans Health Administration and as an Army photojournalist.