The battle of Kham Duc is one of the least known—and least understood—major battles of the Vietnam War.

Kham Duc was a U.S. Army Special Forces camp near the Laotian border.

From May 10–12, 1968, it and the nearby patrol base of Ngok Tavak were attacked by two full regiments of the North Vietnamese Army. 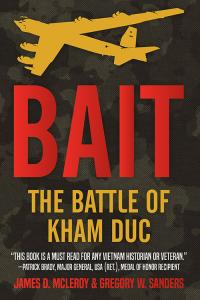 The forthcoming book Bait: The Battle of Kham Duc is the latest addition to the Association of the U.S. Army Book Program.

Author James McLeroy was based at Kham Duc and led U.S. and indigenous troops in the fight, while co-author Gregory Sanders was part of an in-depth intelligence analysis of the events.

Their personal experiences and years of research and interviews will revise our current understanding of the battle.

In Vietnam, special operations forces focused on counterinsurgency and in training local forces in Ranger techniques and tactics.

The AUSA Book Program has many titles devoted to their work, such as Ranger: A Soldier’s Life by Col. Ralph Puckett and Forging a Special Operations Force: The US Army Rangers by Dominic Caracciilo.

The camp at Kham Duc also included soldiers in the Studies and Observations Group. The Pentagon created SOG in 1964 as a secret joint services unit under the Military Assistance Command, Vietnam.

The group specialized in reconnaissance and unconventional warfare, and Kham Duc served as a launching point for cross-border missions into Laos.

Black Ops, Vietnam: The Operational History of MACVSOG is a comprehensive history of the unit across its nine years in Southeast Asia. It details SOG’s role in operations from the Gulf of Tonkin through the Tet Offensive to the Son Tay raid into North Vietnam.

Recently declassified materials also underlay The Green Berets in the Land of a Million Elephants: U.S. Army Special Warfare and the Secret War in Laos, 1959 –74 by Joseph Celeski. Written by a former commander of the 3rd Special Forces Group (Airborne), the book tells for the first time the story of the Green Berets’ service “across the fence.”

Maj. Richard “Dick” Meadows also had adventures in Laos—as well as Korea, North Vietnam and many other places. This legend of the Special Forces community, a key figure in the founding of the U.S. Army’s Delta Force, is the subject of The Quiet Professional: Major Richard J. Meadows of the U.S. Army Special Forces.

The Vietnam War also included, of course, many tales beyond those of the special operations forces. The AUSA Book Program has those covered as well, with books such as The 9th Infantry Division in Vietnam: Unparalleled and Unequaled, Danger’s Dragoons: The Armored Cavalry Task Force of The Big Red One in Vietnam, 1969, and Kontum: The Battle to Save Vietnam.

Please visit www.ausa.org/books to get your copy of any of these titles.