Birth of the M1 Abrams: It Took a Team to Develop a Tank

In October 2017, the U.S. Army announced the establishment of eight cross-functional teams. The teams were created to accelerate capability development amid growing strategic competition with potential near-peer adversaries such as Russia and China, but how likely is it they will deliver their expected capabilities?

The Army has successfully employed cross-functional teams to develop superior combat capabilities in the past, and the lessons learned and insights gained increase the likelihood that today’s teams will succeed.

M1 Abrams tanks and, to the far left, Bradley Fighting Vehicles of the Mississippi National Guard prepare for an exercise in Kuwait.
(Credit: DoD/Sgt. Bill Boecker)

Take the case of the 1972 Main Battle Tank Task Force—a cross-functional team created to foster development of the M1 Abrams main battle tank during the intense U.S.-Soviet strategic competition of the Cold War.

Here, the competitive advantages of cross-functional teams will be used as a lens to analyze them and show what qualifies the task force as such a team, as well as how the task force benefited the Army in its brief existence from January to August 1972.

A cross-functional team is a group of people with varied expertise working together toward a common purpose. Team-building consultant and author Glenn M. Parker similarly defines such a team as “a group of people with a clear purpose representing a variety of functions or disciplines in the organization whose combined efforts are necessary for achieving the team’s purpose.”

Such teams generally help organizations compete better by increasing their speed of output, adaptability and overall responsiveness to the needs of their customers—in the Army’s case, the soldier. These competitive advantages are made possible by the confluence of three major characteristics or dimensions of cross-functional teams.

Parker defines the three dimensions of the teams as purpose, duration and membership. According to Parker, teams vary in purpose, which can be “product development, systems development, quality improvement, problem solving, or reengineering.” 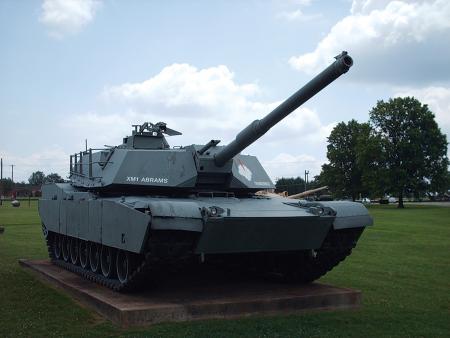 A prototype of what became the Abrams on display at Aberdeen Proving Ground, Md.
(Credit: General Dynamics Land Systems)

They can also be permanent or temporary. Permanent teams are typically built as a separate suborganization within the organizational structure, and temporary teams, which can include task forces, project teams, etc., are set up to address a term requirement or task such as developing a product or conducting a study or analysis.

Per direction from the then-vice chief of staff of the Army to initiate early development activities for a new main battle tank, the commanding general of U.S. Army Combat Developments Command directed the creation of the task force on Jan. 25, 1972, and appointed the commanding general of the U.S. Army Armor Center at Fort Knox, Ky., as chairman.

The Main Battle Tank Task Force qualifies as a cross-functional team based on its purpose, duration and membership. In terms of purpose, the task force was created to solve a portfolio of tangible and quantifiable term requirements. Upon activation, its mission was to develop the materiel need for a new main battle tank. The Defense Systems Management College (the precursor to today’s Defense Acquisition University) 1982 lessons learned report on the development of the M1 Abrams concurs that, “Initially, the mission of the [task force] was to produce a Draft Proposed [Materiel Need].” The Materiel Need statement of that era is largely comparable to today’s Initial Capabilities Document, which—according to the Defense Acquisition University— “identifies … capability gaps in terms of the functional area, the relevant range of military operations, and the timeframe.”

In terms of duration, the task force was a temporary cross-functional team. As mentioned previously, it was created in January 1972 to deliver tangible and quantifiable products to the Department of the Army by August 1972 to facilitate development of a new tank.

The task force also qualifies as a cross-functional team in terms of its membership. It constituted personnel with diverse expertise from different communities within the Army. According to the lessons learned report, the task force was comprised of people with a diverse mix of expertise drawn from different stake-holding communities in the Army modernization enterprise. It consisted of “22 officers and four civilians, representing the user, trainer, and developer.”

The utility of the task force can be analyzed in terms of speed, complexity and customer focus. Using these three competitive advantages as units of analysis helps show how the 1972 task force was effective, while highlighting lessons for the contemporary employment of cross-functional teams in Army acquisition.

The ability to accomplish things faster than a rival is critical in both business and strategic competition among nations. Cross-functional teams help by reducing the time it takes to develop and get products to the customer, in the Army’s case, the soldier. This is because the teams enable organizations to execute different components (concept, basic research, requirements/specification development, engineering) of a development process in parallel rather than sequentially. In 1988, AT&T Inc. was able to cut development time for its 4200 cordless telephone by 50 percent using cross-functional teams. According to a 1989 Fortune magazine article, John Hanley, the AT&T vice president responsible for the product’s development, formed teams of six to 12 people, including engineers, manufacturers and marketers, empowered them to make decisions on product design, development and marketing, and enforced rigid speed and time requirements.

The Main Battle Tank Task Force was established in January 1972, completed its work and was disbanded in August 1972. This means it took it approximately seven to eight months to prepare a capability requirements package for review by the Army Systems Acquisition Review Council, followed by the Defense Systems Acquisition Review Council—a body like today’s Defense Acquisition Board. Among other things, according to the 1982 report prepared for the Defense Systems Management College, the task force had to:

In her study of teaming and innovation, Harvard Business School professor Amy C. Edmondson agrees that “at its core, teaming is about reaching across or spanning … boundaries.” She presents three types of boundaries teams typically contend with: physical distance like location and time zone, status boundaries like profession and hierarchical levels in organizations, and knowledge boundaries like “experience, education, and so on.”

The Main Battle Tank Task Force was manned and empowered to inherently transcend all three types of boundaries between the user/warfighter, training, acquisition, financial and force management communities in the Army, which accounted for its problem-solving ability and speed. As previously stated, the task force drew membership, and subsequently, expertise and support from the user, trainer and systems developer/acquisition communities. Additionally, the task force could leverage support from the Headquarters, Department of the Army staff, through the steering group created to monitor its progress and provide guidance.

Cross-functional teams help focus the efforts of different functional components in an organization on meeting the requirements of the customer. Parker views teams as an “important tool” in delivering quality (defined as customer satisfaction) “when the product or service spans several functions.”

The Main Battle Tank Task Force helped focus the efforts of different components within the Army’s modernization enterprise on delivering quality, in other words, satisfying the soldier’s requirements for a superior tank weapon system. Subsequently, Army leaders of the era placed the task force under the leadership of the commandant of the U.S. Army Armor School to ensure that expeditiously fulfilling the needs of the armor warfighter (customer) would be the central focus in development of the new tank. Consequently, in January 1973, the secretary of defense approved the concept paper for the XM815 tank, which became the XM1 prototype and, ultimately, the M1 Abrams.

The case of the Main Battle Tank Task Force reveals, among other things, that the Army has successfully used cross-functional teams in the past to expedite the development of capabilities, solve enterprise-level challenges to modernization and increase focus on the high-priority capability needs of the force. The task force case shows that to gain speed and other competitive advantages of cross-functional teams, contemporary Army leaders should ensure teams are given clear, quantifiable objectives (purpose/charter) linked to a viable time frame (duration). Leaders should also ensure that teams have a diverse talent pool, suitable leadership and, most importantly, the requisite level of empowerment to transcend traditional institutional processes and boundaries.

Given the critical importance of cross-functional team empowerment, future research should look for innovative ways to empower teams to fully realize their competitive advantages.

Maj. Hassan Kamara is an acquisition officer serving as a proponent officer in the Office of the Army Director for Acquisition Career Management, U.S. Army Acquisition Support Center, Fort Belvoir, Virginia. Previously, he served as a Strategic Study Fellow on the Army Future Studies Group, and he worked on the early development of the U.S. Army Futures Command.