Beverly Lowe knew something was amiss when no one would tell her who the recipient of the 2018 Brigadier General Robert Drolet Service to Veterans Award was.

As co-host of the YMCA Veterans Prayer Breakfast each November, it’s intel she is typically privy to. But when she began asking the question this year, she found people time and time again were dodging the answer. 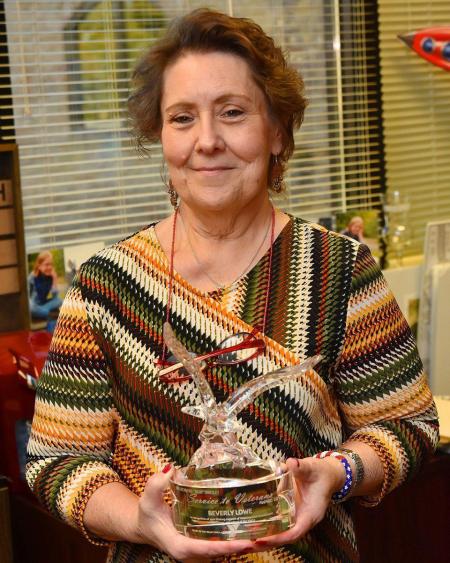 “When Cathy started making the speech, I knew from what she was saying that it was me, and I was just like, ‘No, no, no,’” Lowe said. “Because I don’t want awards. That’s not what I want. I like to be in the background doing work. That’s not what I do this for.”

It may not be her motivation, but the community found her worthy of the honor.

“Beverly was selected to receive the 2018 Brigadier General Robert Drolet Service to Veterans Award because she reflects the same shared values as the Heart of the Valley YMCA and the armed forces of the United States; common values of service, sacrifice, duty and honor,” said retired Brig. Gen. Bob Drolet, for whom the award is named. “She has consistently supported and served veterans and their families throughout the Tennessee Valley over several years in a variety positions within the community. She asks nothing in return and has been steadfast and true in her commitment.”

Lowe’s list of community involvement is extensive – president of the North Alabama Veterans and Fraternal Organizations Coalition, medical liaison to Fox Army Health Center, Huntsville Mayor Tommy Battle’s liaison to the military, board member for the Redstone-Huntsville chapter of the Association of the United States Army. Basically anywhere there is a need to serve veterans and the military, Lowe is there.

“In this town, there are just so many opportunities where you can serve veterans and the veterans’ community,” Lowe said.

But for Lowe it’s more than just the plethora of opportunities, it’s a way of life that was instilled in her decades ago.

“My husband was a patriot,” Lowe said of her husband Ralph, who passed away 39 years ago. “His patriotism was something that I wanted to carry on. He’s been gone for a long, long time, but it’s just a way that I have of keeping his spirit alive. It becomes a way of life to serve. Service is a way of life, and I serve veterans. It’s just my service. That’s what I do.”

(Editor’s note: This story was published with permission from The Redstone Rocket.)