“University of Pennsylvania was home to one of the first computers,” Peter Lynch recalls, referring to ENIAC, the world’s first general-purpose electronic computer. This might seem a non sequitur in a conversation about military service, but the original function of this general-purpose machine was, as Lynch points out, to calculate firing solutions for Army and Navy artillery.

Like his graduate school’s historied computer, before Lynch would achieve success in the civilian sector, write three bestselling books and manage the $14 billion Fidelity Magellan Fund, he traces his early development to his two years in military service. As a 24-year-old lieutenant, he served in South Korea, managed a property book and led air defense artillery soldiers in the 2nd Infantry Division.

Regardless of the career field, character and competence are required in every military job, and the Army has a time-honored track record of instilling these values. Like others before and after him, Lynch brought the values he learned and embraced while in uniform with him into the civilian world. Doing this helped him ascend to the highest levels of achievement in finance.

After 11 months at Fort Bliss, Texas, Lynch was stationed in South Korea for 13 months in 1968 and 1969. He met his wife-to-be while he was going to graduate school at Penn’s Wharton School of Business. Two weeks after getting married, he left for Korea. “I lived in a remote area about six hours from the next Army base, by a deuce-and-a-half. … We were in Quonset huts. … We used to take a jeep two hours to this fancy Air Force base. The Air Force had everything. We’d go to their officer’s quarters to take showers. It was like the Four Seasons!” 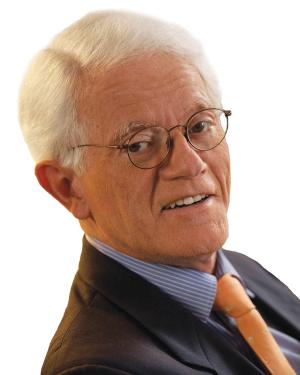 During his first 13 months of marriage, he’d write postcards and make voice recordings on cassette tapes during his free time to mail back to his wife in the U.S. It wasn’t easy keeping in touch with his new bride, but between learning how to communicate long-distance and serving as a battery executive officer, his service in Korea solidified the most important lesson he learned during his time in uniform: The keys to success are discipline and good communication.

When Lynch talks about discipline, he clarifies: “I’m not just talking about being able to bounce a dime off of your bed and make your boots look shiny. I’m talking about nonplanned inspections … where leaders go through your logbooks and check what kind of records you’re keeping and what kind of maintenance you’re doing.”

In his investing career, Lynch attributes much of his success to doing the proper research on companies before investing in them. One of the key recommendations he makes in his bestselling book One Up on Wall Street: How to Use What You Already Know to Make Money in the Market is that a prudent investor understand what he or she is paying for when buying stock in a company.

“When a person invests, [he] needs to do his homework. He’ll be really careful when he buys a refrigerator, and he’ll spend hours and hours trying to save a couple hundred dollars on a vacation, but then he’s willing to invest $5,000 in a stock he heard about on the bus or at a party. That’s pure speculation. He might as well take it to the casino and bet on red or black.”

Fidelity, he grew the Magellan Fund from $18 million to over $14 billion. But most notable was the fact that even after the fund became the largest in the U.S. in 1983, with one of every 100 Americans invested, its returns continued to boom, beating 99 percent of other funds.

Those results required doing the right homework and paying attention to the proper details, which is something Lynch had the chance to put into practice plenty of times during his Army service. As a battery executive officer, he recalls being responsible for signing the property book and keeping track of radar, missiles and a computer the size of two refrigerators that had to be housed inside a trailer.

“We might have had $100 million worth of equipment,” he remembered. “We did count the 18 missiles,” he said with a laugh, referring to the inventory of 12 conventional and six nuclear-tipped Nike Hercules. “I mean … one nuclear Hercules could knock down an entire squadron of enemy bombers.”

But inventories and doing your homework are only the first component of the discipline Lynch learned during his time in the Army. The military also taught him something that every service member can relate to: fortitude. “The key organ in an investor’s body isn’t the brain; it’s the stomach,” he said. Markets can fluctuate, and sometimes dramatically. “When the market is up, everyone is a long-term investor, but when the background noise changes, the conversation on CNN and the internet go negative and things turn gloomy, people can be too quick to abandon their plans and strategy.”

Lynch’s advice to investors is simple: Do your homework, come up with a sound strategy and be willing to stick to it long-term. This shouldn’t be surprising advice coming from a former Army officer who was stationed in a remote area with little supervision from higher command. “We were a group of 18-, 19- and 20-year-olds, and we were short on warrant officers and NCOs. We were isolated. We were making our own electricity. We had the radar, the missiles and the launch sites. And we were in foxholes 24/7, protecting against North Korean infiltration. An attack on any one of the missiles would have been a disaster,” he said.

In Lynch’s situation in South Korea, there wasn’t really anyone above him to call when issues arose. “There were no majors, light colonels or colonels to ask for help. So, we needed to have a plan.” And once those plans were set, the unit needed to stick to them and perform well: When the time comes to execute, “you have to commit and say ‘OK. Let’s go.’ ” As Lynch put it, “You need to know how to work the data. There are a lot of electronic elements, mechanical elements, and there is a lot of practice that goes into lifting up a Nike Hercules missile.” To execute well, discipline in training and prior planning won the day.

The last element to a well-disciplined and well-thought-out plan is good communication. “Move, shoot, and communicate. Communication is critical in every aspect of life. [Often] you’ll think people heard what you said, but when you ask them to repeat what they heard … you find that what you thought you said didn’t get through,” Lynch said. Managing any large group or project requires that a person be capable of delegating; many tasks are simply too big for one person.

As Lynch sees it, that’s where true leadership comes in. “The definition of management is ‘getting things done through others.’ The easiest way to do something is to just do it yourself. But when you have a division, a battery, or a company, that’s not possible. You have to use other people,” he said. The nuance of tailoring an approach to fit the different personalities within an organization is, as Lynch views it, the difference between effective and poor leadership. “You can’t just order a person. You have to explain to them what the goal is, listen to their questions and get back to them with feedback. You need to compliment and encourage positive performance for some people, and you need to give others a push.” Striking an effective balance is key.

Like ENIAC, whether in service to the Army or in service to the general population, Lynch’s sense for numbers is world-class. But what he learned from his time in uniform goes well beyond that which can be calculated. In Lynch’s case, the numbers may change, but the formula remains the same: Discipline, hard work and good communication yield success.