Allyn: Sequestration presents ‘a clear and present danger’ to Army

The returning threat of sequestration if politicians cannot agree on spending priorities represents “a clear and present danger” to the Army’s ability to fulfill its national security obligations, Army Vice Chief of Staff Gen. Daniel B. Allyn said.
Sequestration, the automatic budget cuts that would occur if spending exceeds previously approved budget caps, was suspended for two years by a temporary agreement but will return as a threat in fiscal year 2018.
“For the Army to move forward and address our readiness and modernization shortfalls, the Budget Control Act must be repealed,” Allyn said, using the formal name of the sequestration law. 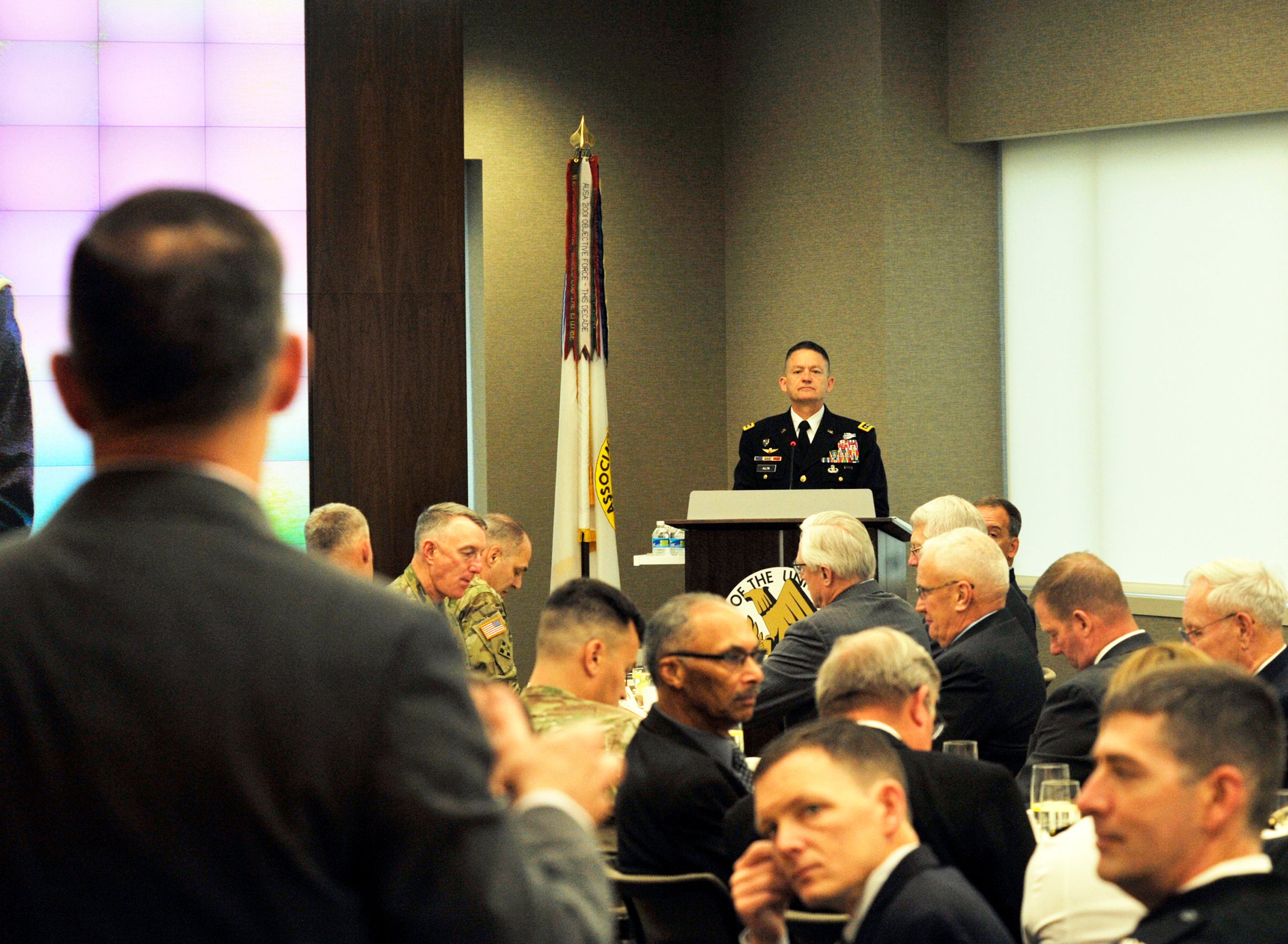 The Army vice chief of staff, Gen. Daniel B. Allyn, speaking and answering questions from attendees at the AUSA Institute of Land Warfare breakfast, said, ‘For the Army to move forward … the Budget Control Act must be repealed.’
(AUSA News photo by Luc Dunn)
Speaking May 10 at an Institute of Land Warfare breakfast hosted by the Association of the U.S. Army, Allyn said even the slightly larger budgets approved during the sequestration hiatus have been “insufficient to rebuild decisive-action readiness and modernize for the future.”
Noting that the service has been forced to “selectively” upgrade equipment and weaponry as its modernization funding has shrunk by a third since 2011, Allyn said the even tighter sequestration budget levels set to return in fiscal 2018 – absent further congressional action – would “impede predictable planning and sustained program momentum.”
“These tradeoffs are a reflection of constrained resources, not strategic insight,” Allyn said during the forum, held at the AUSA Conference and Event Center in Arlington, Virginia.
Adding, “Readiness is not easily restored once lost. As leaders, we have an obligation to deploy our soldiers into combat with the best equipment our nation can provide. The decisions we make in the next few years will lay the foundation for the next generation of soldiers.”
Allyn also lauded Gen. Gordon R. Sullivan, AUSA’s president and CEO, as “a national treasure.’’
Allyn said that Sullivan, who has lead AUSA for 18 1/2 years, has “provided critical leadership” to the nonprofit educational association and has shown “deep personal appreciation” for soldiers and their families for more than six decades.
“That is longer than I have been alive,” said Allyn, who was born in 1959. “I bet you are glad I mentioned that.”
This Institute of Land Warfare breakfast was sponsored by DRS Technologies, an AUSA sustaining member company.