This year your association had the honor and privilege to establish the Sergeant Major of the Army Leon Van Autreve Scholarship.

Thanks to USAA and its contribution to this opportunity to support soldiers and their families across all three components of the Army, AUSA recognized eight very special recipients.

Discussions began in August last year to establish the scholarship named in honor of our Army’s 4th Sergeant Major of the Army, Leon Van Autreve.

With a combat engineer background, Van Autreve championed many education initiatives throughout the Army during his tenure which laid the foundation for what is today’s noncommissioned officer education and professional development system.

In a 1994 interview, Van Autreve said school was a very important part of his childhood when his family immigrated to the United States from Belgium, and he relished the combination of caring and discipline he received while attending school in Delphus, Ohio.

So, naming this scholarship after Van Autreve was a good fit, and with the approval of his family, the scholarship became a reality.

Receiving more than 100 applications competing for the scholarships, the selection committee had its work cut out for the members to identify the top eight submissions. 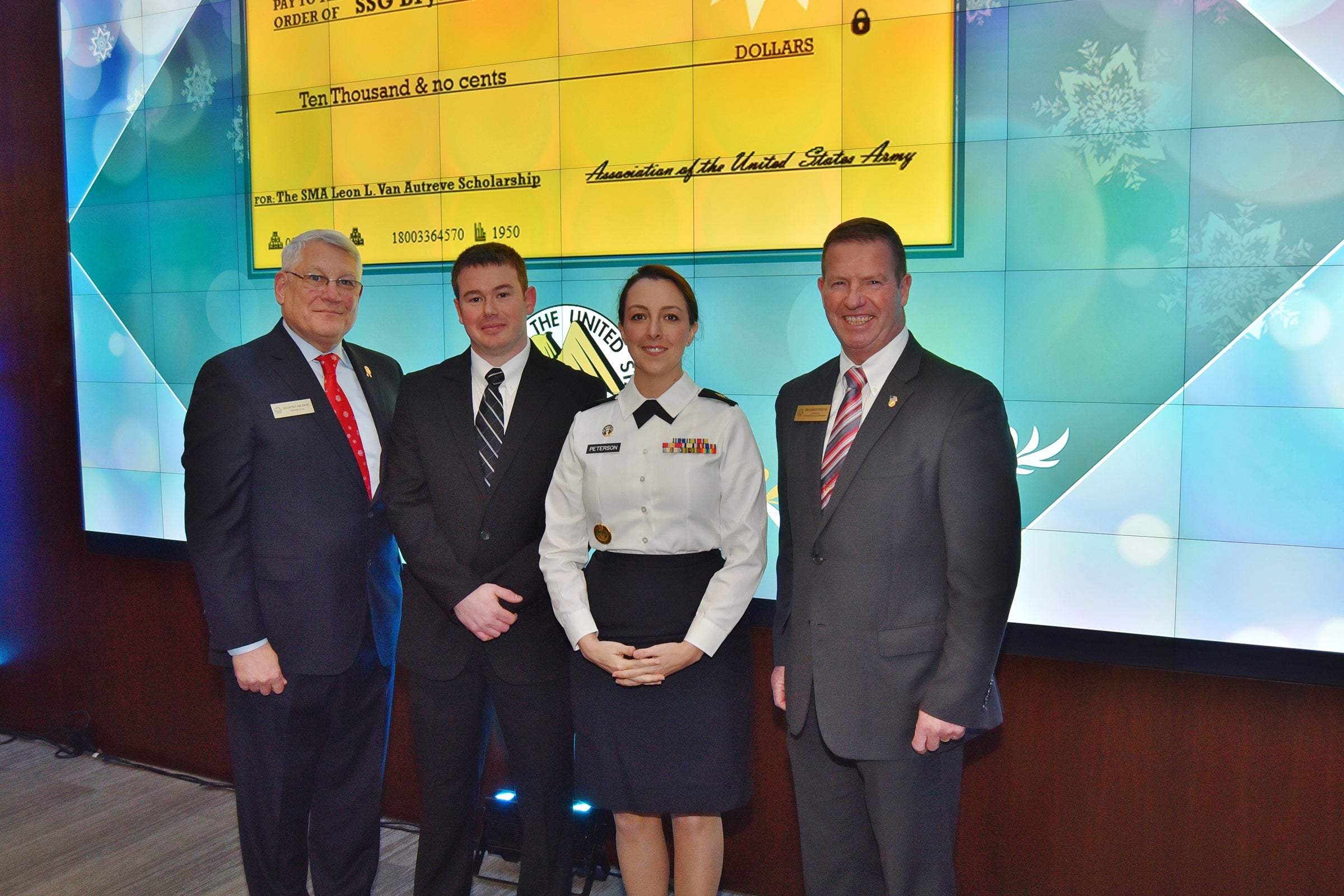 Adam is the son of Sgt. Maj. Joseph and Rhonda Pendry and, if accepted, plans to attend the Massachusetts Institute of Technology (MIT).

Adam’s high school math teacher described him as “one of the hardest working, most gifted students he encountered during in his 22 years as an educator.”

“In robotics, I have discovered my passion for all things technical, and the engineering design process has inspired me to pursue a career in physics with the eventual goal of a master’s degree in aerospace engineering,” Adam said.

Adam carried a grade point average of 5.512, an SAT score of 1550 and he also received numerous awards and recognitions to include induction into the National Honor Society and becoming an Eagle Scout.

Adam and his family attended the scholarship presentation held in their honor on Dec. 15, at the AUSA headquarters in Arlington, Va.

In attendance were many active and retired senior leaders and dignitaries from across the U.S Army Military District of Washington.

The excitement and thrill for Adam and his family were felt throughout the evening by those in attendance who had the opportunity to meet this exceptionally bright young man and his Army family.

As Adam received the check from retired Gen. Carter Ham, AUSA president and CEO, one member of the audience was quoted saying: “This is like winning the lottery.”

The second-place recipient of the $10,000 scholarship was Staff Sgt. Bryanne Peterson from Front Royal, Va.

Bryanne is a public affairs specialist in the Army Reserve and is married with three children. She is also a graduate assistant at Virginia Tech where she is working on a doctorate in Integrative STEM education.

In addition to her academic achievements and goals, Bryanne is a Girl Scout leader, robotics coach and a 4-H instructor.

With 16 years in the Army, Bryanne has served in a variety of leadership positions including, drill sergeant, training NCO, squad leader and platoon sergeant.

Bryanne and her husband, Easton, both attended the award presentation.

The third-place recipient of the $5,000 scholarship was 2nd Lt. Maria Colompos, a military police officer currently serving in Kaiserslautern, Germany.

Maria is a Chicago native and 2016 ROTC graduate currently working on her master’s degree in public policy and administration through Northwestern University.

She is fluent in Greek and Spanish and has served as a Spanish translator for a humanitarian mission in Guatemala.

In her spare time, Maria volunteers at the wounded warrior center in Landstuhl, Germany.

The remaining five recipients of the $2,000 scholarships were:

In addition to many of her volunteer activities, Stacy is a volunteer for the American Red Cross and the United Services Organization (USO) in Grafenwoehr.

Lyle is attending Colorado State University and is working on a bachelor’s degree in health and exercise science.

Tyler wants to become a military officer through the ROTC program at Ohio State or Penn State.

She volunteers in support of her local Family Readiness Group and Army Community Service.

Gerald is enrolled at Ashford University and is working on a bachelor’s degree in social and criminal justice.

Celebrating the success of these eight 2017 Van Autreve scholarship awards was the presentation of a $50,000 check for the 2018 Van Autreve schoolarship fund by retired Command Sgt. Major Robert Winzenried, program director for military affairs (Army) for USAA, was the highlight of the evening.

All of us look forward to the announcement, application submissions, selection and presentation of our 2018 scholarship awardees.

The AUSA staff and many of the evening’s attendees donated a variety of gift baskets and special items for a silent and live auction event that followed the scholarship presentations.

All of the donations from the auction were directly deposited into the scholarship fund to support next year’s scholastic awards.