6,000+ personalized bricks lead the way to the Army Museum

6,000+ personalized bricks lead the way to the Army Museum

Construction of the National Museum of the U.S. Army is well underway with a planned opening in 2019.

Also in production are the more than 6,000 personalized commemorative bricks that will be laid along the Path of Remembrance leading to the National Army Museum. 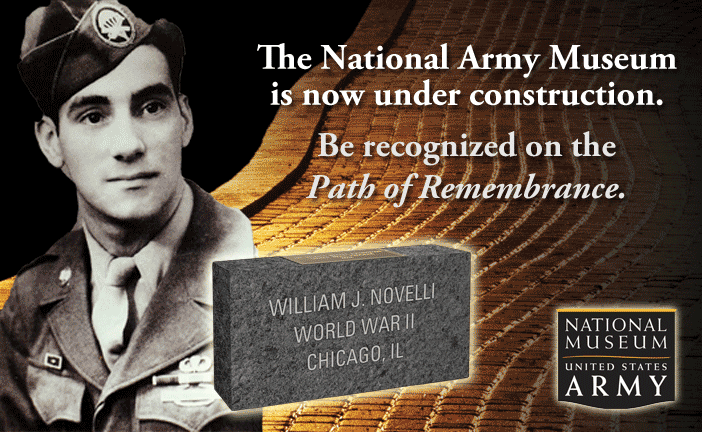 These high quality American-made granite bricks mined from the Mesabi Range in northern Minnesota, and engraved in Boise, Idaho, will be showcased on the museum’s 84-acre campus at Fort Belvoir Va., outside our nation’s capital.

“We’re having tremendous response to this program” said Donor Programs Associate Director Jenna Truax, who oversees the marketing, sales and installation of the bricks.

She added, “Although the museum won’t open until 2019, we have begun producing these bricks to ensure they’ll be available and installed when the museum opens.

“Due to high demand, we’ve expanded by the width of the inlaid bricks portion of the promenade by 40 percent.

“We expect to sell out the promenade this fall,” Truax said. Adding, “Additional areas are planned for expansion of the commemorative bricks program, but those areas may not be completed in time for museum dedication.”

Congress directed the U.S. Army and the Army Historical Foundation to work in joint partnership to make this museum a reality.

Patriotic Americans buying a brick to honor the soldier in their life are helping to fund the campaign, as well as offering the opportunity to say “thanks” to the 30 million men and women who have worn the uniform of the U.S. Army over the last 242 years.

The Army Historical Foundation’s website (www.armyhistory.org/bricks/) captures stories on “Why My Brick,” with some selected stories to be included in the museum campaign’s quarterly newsletter with a 100,000 plus distribution.

With the support of more than 155,000 individual and corporate donors, military and veterans’ service organizations, and partners like the Association of the U.S. Army, the National Museum of the U.S. Army is taking shape.

The museum will tell the “Army Story” through the citizen soldiers who serve, sacrifice and accomplish great things.

Truax said, “Galleries on Founding the Nation, Preserving the Nation and Global War will also include the Army and Society Gallery, making this Museum unique.

From Lewis and Clark’s exploration, the first airplane purchase from the Wright Brothers, the first computer (ENIAC) and satellite, as well as the myriad of medical and scientific breakthroughs that benefit society and afford us the freedoms and lifestyle we enjoy today, the Army has a rich history, a bold story to be shared.”

The National Museum of the United States Army will serve as the capstone of the Army Museum Enterprise and provide the only comprehensive portrayal of Army history and traditions.

The museum will celebrate the selfless service and sacrifice of over 30 million men and women who have worn the Army uniform since 1775.

It will be a technological marvel incorporating the latest advances in museum exhibits while providing advanced educational opportunities that will capture the attention of visitors old and young.

As the Army’s national landmark, the museum will honor United States soldiers – past, present, and future – and provide an interactive educational experience explaining the Army’s role in creating and defending our nation, as well as the Army’s social initiatives and contributions for 242 years.

The main building will be approximately 185,000 square feet and display selections from over 15,000 pieces from the Army Art Collection and 30,000 artifacts, documents, and images.

The vast majority of these rare and priceless artifacts have never been seen by the American people.