He was interred at the George Bush Presidential Library and Museum on the west campus of Texas A&M University, College Station, Texas, Dec. 6, after lying in state in the Capitol Rotunda, and eulogized in memorial services at the National Cathedral in Washington, D.C., and St. Martin’s Episcopal Church in Houston.

In 1993, Bush received the Association of the U.S. Army’s General George Catlett Marshall Medal for his “selfless and outstanding service to the United States of America and “his life-long accomplishments, culminating with his ultimate service, as president.”

In his acceptance speech at the AUSA Annual Meeting’s Marshall Dinner, Bush said, “I’ll tell you how you get a medal like this, you get an Army you can count on and let them do their jobs,” as he reflected on the success of Operation Desert Storm – Operation Desert Shield.

He added, “America has a mandate of responsibility. America must lead. No other country has the reach and the resources to touch every corner of the world.”

Retired Army Gen. Gordon R. Sullivan, former AUSA president and CEO, who was selected to become the Army’s 32nd Chief of Staff by President George H.W. Bush, had a special relationship with the president and shared this story with AUSA News. 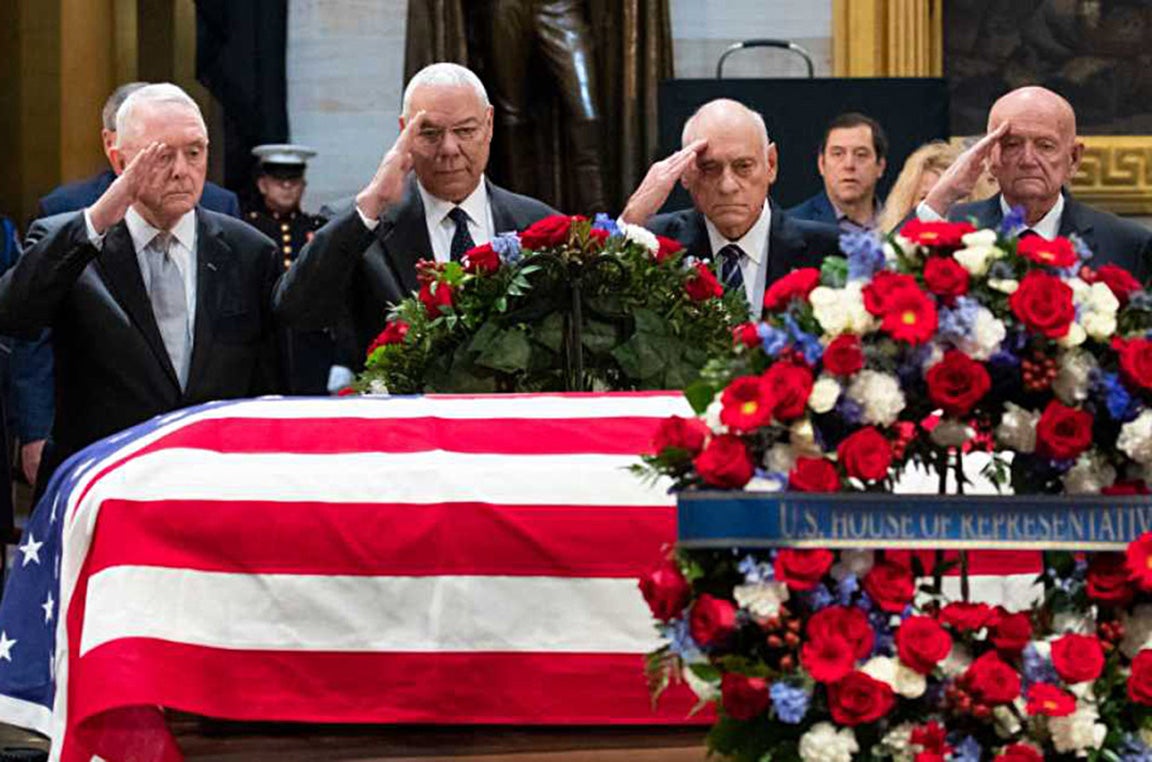 Sullivan told the News that he admired the former president’s leadership, recalling Bush’s handling of Hurricane Andrew in August 1992 as an example.

The first week after the Category 5 hurricane struck Florida was chaotic, Sullivan said. “They really needed help, I got a call to show up at the White House to talk with President Bush.”

Sullivan, the vice chairman of the Joint Chiefs of Staff, Adm. David E. Jeremiah, and Deputy Defense Secretary Donald J. Atwood Jr. attended a briefing where they talked about the support the military could provide the Federal Emergency Management Agency, Sullivan said.

“President Bush wanted to know how fast I could get there. I told him I’d go the next day. He said, ‘OK,’ and asked me to do two things. First, he wanted me to brief the vice president. Second, after I made all of the decisions and gave all of the orders, President Bush wanted me to call so he’d know how to respond to the many questions he expected,” Sullivan recalled.

“I did exactly that. I spoke with the vice president and his wife. I called through the White House switchboard to report what we were going to do.”

Sullivan added, “That, to me, was an important sign of his style of leadership. He trusted me. I have forever used his example of what we all ought to expect of presidential leadership.”