This year’s race will precede the Monday, Oct. 8, opening session of the Association of the U.S. Army’s Annual Meeting and Exposition at the Walter E. Washington Convention Center.

Produced by the U.S. Army Military District of Washington, the Army’s race will attract military and civilian runners from around the world. 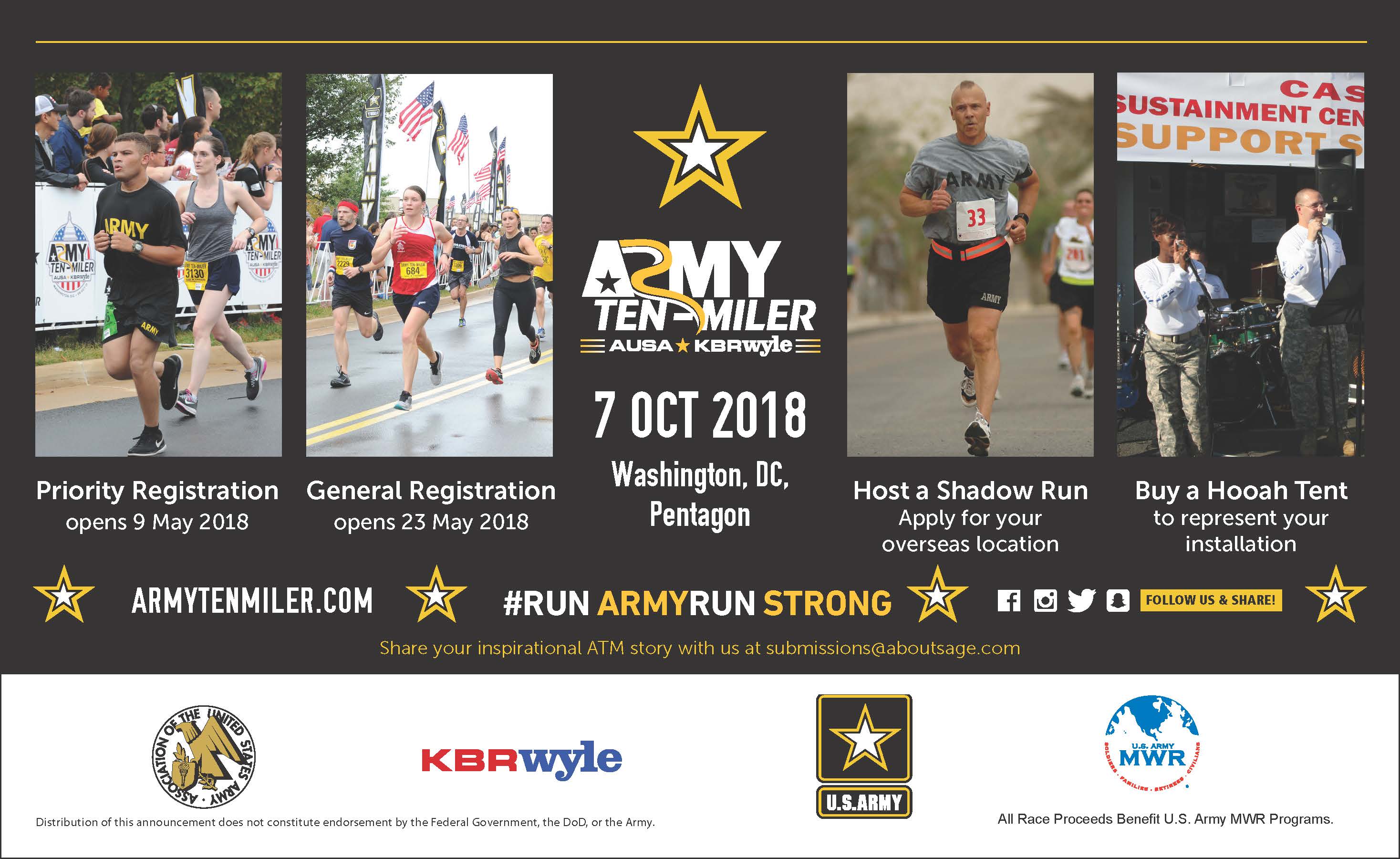 Army Ten-Miler officials have confirmed that they will continue the two-phase registration process for the Army’s race that was introduced in 2011.

Priority registration, presented by Navy Federal Credit Union, for all U.S. service members and runners who have participated in seven or more Army Ten-Miler races is scheduled to open May 9 at 7:00 a.m., EDT.

U.S. service members must use a “.mil” address to register and a searchable database will be posted on the Ten-Miler website in April for seven-time or more Army Ten-Miler runners.

General registration, presented by General Dynamics, for the public at large is scheduled to open May 23 at 7:00 a.m., EDT.

Race registrations are sold on a first-come, first-served basis. Installations will be able to obtain pre-paid entries for their teams during both registration sessions.

For those who miss registration in May, the Army Ten-Miler online transfer program is planned to open June 13.

Last year, up to 1,500 runners were able to enter the race through the transfer program.

These times apply to both days at the DC Armory, where the Army-Ten Miler Expo will be held.

The Crystal Gateway Marriott Hotel in Arlington, Va., will again serve as the headquarter hotel for this year’s race.

The hotel is conveniently located less than a mile from the Pentagon and is on the Metro Blue and Yellow Lines.

The hotel will offer a special room rate for runners and host the popular all-you-can-eat General Dynamics Pasta Dinner on Saturday, Oct. 6.

Since the room block and pasta dinner always sell out, race officials encourage runners to make their reservations early.

Race and registration information are available at www.armytenmiler.com.

The Lead Sponsors for the 2018 race are the Association of the United States Army and KBRwyle, an AUSA sustaining member.

A complete list of 2018 Army Ten-Miler sponsors and military community partners will be identified at a later date.

The Army Ten-Miler offers a variety of sponsor packages for organizations to achieve their business objectives and to support soldiers and soldier families.