‘Social media-savvy soldiers’ are key to fighting in future battlefields

Young, social media-savvy soldiers may be the linchpin in commanders’ efforts to use cyber networks to throw virtual effects at enemies in future battlefields, according to Army leaders.

“I think there is a better comfort level with our young folks that understand the complexity of the environment in which we are operating,” Col. Jerry Turner, commander of the 2nd Stryker Brigade Combat Team, said at a Nov. 3 discussion on cyber operations, hosted by the Association of the U.S. Army. 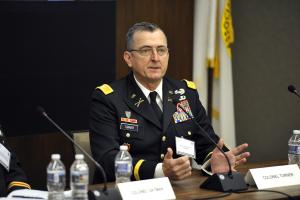 “They think in a very network kind of way because that’s how they operate in their daily lives,” he continued.

Adding, “I really think we have to figure out how to take advantage of it.”

During Turner’s 2nd Infantry Division unit’s rotation at Fort Irwin, Calif., earlier this year, the unit’s use of cyber effects in simulated battle underwent study as part of the Cyber Support to Corps and Below pilot.

Now with five rotations completed under the pilot, cyber officials are reviewing the research that could possibly shape doctrine in how maneuver commanders use cyber in battle.

“A network is a warfighting platform and we need to treat it as such,” Brig. Gen. Patricia Frost, director of cyber for the Army’s Office of the Deputy Chief of Staff, G-3/5/7, said at the discussion: “It is not an [information technology] service.” 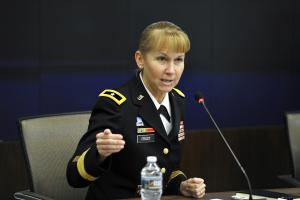 According to Frost, the pilot studies showed that a team of no more than 15 soldiers, consisting of various ranks and expertise, worked best to advise a brigade commander on offensive and defensive cyber tactics, electronic warfare and information operations against mock enemies.

The expeditionary cyber teams embed and learn the ins and outs of their respective brigade to offer a distinct set of cyber tactics that fit into the commander’s battle plans.

With cyber assets on hand, Turner said, he was able to make his unit more adaptable and agile in the pilot’s training scenarios.

They also helped his unit influence enemy movements and neutralize the connective tissue between the enemy’s main force and local forces.

“These networks give us options,” he said. “You can’t attack everything I got.”

The brigade commander relied on cyber assets so much that he voiced concern on how to protect them from enemy attacks when they’re let loose on the real battlefield.

“If it was me, one of the Army’s No. 1 priorities would be to protect these networks,” he said. “It’s what makes us, with the current force structure, capable of doing what we’re asked to do.”

In the pilot program, leaders had to sift through a flood of information coming from several cyber assets when quick military decisions were needed.

“I look at the network as very diverse,” Turner said. “We need to figure out how we fuse all this, because it’s a lot.”

As a whole, the evolving cyber domain has also been difficult for Army strategists to keep up with.

“That’s where we’re struggling,” Frost said. “We are overwhelmed by the volume of data and how it has continued to grow exponentially every year.”

One possible solution is building up the force of cyber operators. In fiscal year 2016, about 130 Army cyber operators were trained. This year, more than 560 operators are expected to graduate from the Army Cyber School at Fort Gordon, Ga., according to Col. Kenneth Rector, the school’s commandant.

At the school, lessons will heavily focus on cyber theory and emphasize the need for soldiers to adapt and embrace new and ever-evolving technologies.

“They have to be invested in lifelong learning,” he said of cyber operators.

The unique school setting also gives young soldiers entering the budding career field a chance to learn from each other and, perhaps, even teach the entire class themselves.

“When they come to the classroom, they might be the expert,” Rector said.

“We allow them to have an adaptive environment where there’s some crosstalk in the classroom, and maybe the instructor isn’t [always] the expert.”